Why is this April so busy, you guys? Case in point: this past weekend.*

~Friday: my sweetie and I were part of our local library's Shakespeare lock-in. Our portion involved two full hours of insults, swordplay, and improv. Despite years of (varying degrees of) experience, the latter still makes me exceedingly nervous. Fortunately Don did the heavy lifting; I was there to "yes, and" as well as to teen-wrangle. Also blithered on quite a bit about various weapons and stage combat, which is always good times.

~Saturday: Crimson Pirates gig. Nerves were frazzled well in advance thanks to the dodginess of my voice (spoiler alert: I made it through, even though the week before I was nigh on mute by the end of rehearsal) and the sheer number of songs we were performing. I'm playing ukulele on SO MANY songs now, and since we've gone back and reworked some of our older tunes, I've also got a buttload of new harmonies. It's all to the good, and makes performing these songs ever so much more fun, but it's no less but daunting. We also had a few new tunes going up, including one that we've been doing for less than a month. That I brought to the table. That I'm opening with fingerpicking. That I'm not particularly good at. Anyway, it was a marvelous evening. Great audience, good energy, and a gracious host (he decorated the place, for heaven's sake, and made a special batch of piratey rum drinks, bless him!). As for the two songs I was worried about screwing up, well... I screwed them both up. Somehow, the world is still turning. Anyway, we didn't get home until nearly 1 a.m., and not to bed until nearly an hour later, which led to...

~Sunday: ... far too little sleep. I had to get up in time to prep for the NYRF director's meeting which, somehow,** we found ourselves hosting. Naturally, when people gather at my house there is nothing for it but that they must have vast amounts of food placed in front of them. I cleaned, I chopped, I prepped, I made what I worried was far too much guacamole.*** While they met and conversed and charted the course of the coming season, I roped J. (fiancé of one of the choreographers) into helping me clean up my veggie garden. We also planted peas. Then, because the day was beautiful and we still had time, J. and I went for a 3.2 mile run, replete with terrible hills. By the time we got back, the meeting was over. My day, however, was still not done. In light of the forthcoming SCRPF (apologies if I've botched the abbreviation, but it's fun to say it aloud all the same) gig, we still had twenty additional songs to run through. So. Two hours of Crimson Pirates rehearsal. Boom.

If I sound like I'm whinging, I'm really not. I'm getting a chance to do a whole lot of things that I love, or at least tolerate/need to do (I'm looking at you, Training for a Half Marathon). It's just... I'm old(ish) and not as fit as I ought to be and this cold will hang on and I'm tired and want a nap and there's a lot of other things I really really want to do and people I really really want to see and I'm old(ish) and tired and it's tough to find a few spare minutes.

Here's where I was going to link to a video from Saturday's gig, but honestly? The picture quality isn't the best, the sound mix is uneven, and I'm still not all that comfortable listening to myself sing/play. Instead, I offer this old (read: OLD!!!!) headshot. Giggle as you will. 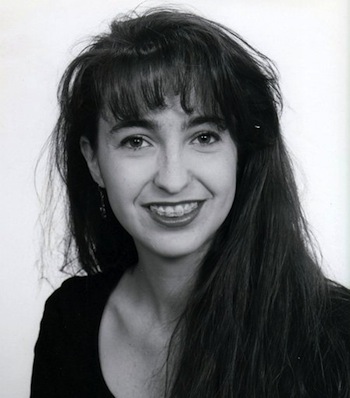 * in which, I want to point out, I also taught two cardio-kickboxing classes.

** "Oh, by the way, I volunteered to host the director's meeting the day after our Tuxedo Ridge gig. That's cool, right?" ~my sweetie