I love my kitties. My one-eyed Princess Emse of Adorable and my Night Fury/Mini Panther/Handsomest of Toms are charming and lovely and get along well enough that we don't worry about mutually assured destruction.

Since losing our beautiful senior girls (the engagement kitties) over the course of a year, we knew we'd eventually look for another cat to add to our family. Thing is, Handsome Tom is 1. kind of a jerk and 2. seriously territorial. He sprays if a stray cat so much as lingers outside the kitchen door. If we're taking in another kitty, it will probably need to be both female and on the younger end of the age range. Rough for me, since I want to adopt the one who's been there the longest, who is the 'problem child.' Still, I can work with this.

Only... I was at PetSmart this week, and there was a lanky black tomcat. Sort of offset and awkward. Missing an entire ear. I know this would be a terrible idea. I KNOW IT. But I've never forgotten my desire to build an army of irregular kitties: missing limbs, tails, eyes, ears, moxie. This could be my moment.

But Handsome Tom would rebel. Our lives would be naught but clean-up and mediation. This is not, after all, my moment. It's waiting, though. It's nigh. Soon, there will be kitty.

A large portion of today was given over to cleaning, drying, polishing, and oiling/waterproofing my Ren Faire boots.

Then I looked at the weekend forecast. Whimpered. Applied another layer of oil. 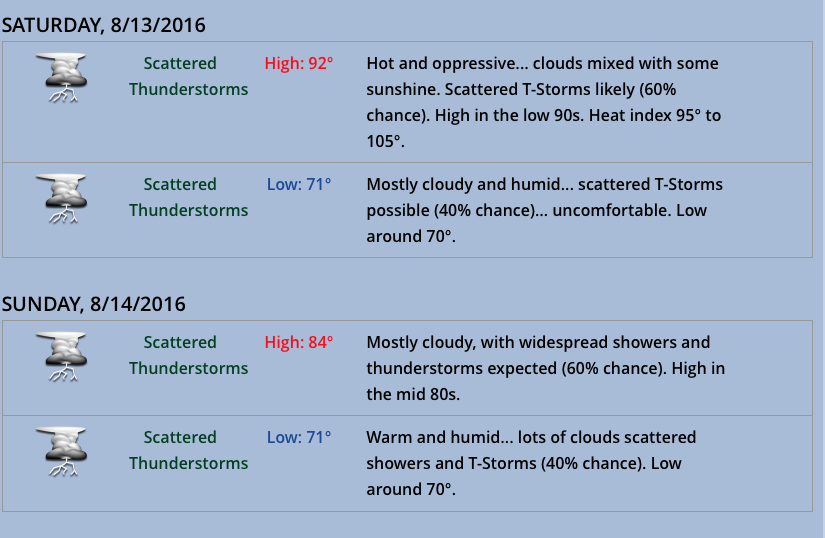 Also, how disheartening a forecast is 'hot and oppressive'? Especially to a person in tall leather boots, tights, two layers of skirts, a long sleeved shirt, and a snug bodice. Especially when that person runs and jumps and kicks and punches and has limited access to shade. The answer is very. Very damned disheartening.

I thought last rehearsal weekend was a trial, but this one is worse. Two days of 90+ heat that often feels 8-10 degrees warmer. Significant humidity. A goodly part of the day is spent in performance space with no shade. It's the nature of the stages. You drink water, you chug Gatorade or Emergen-C, you try to stay sufficiently fueled even though you really, really don't feel like eating. You try to stay positive, to set a good example, to avoid the cranky that threatens at all turns. You try to focus, to be a good scene partner, to be a good fight partner. You juggle logistics. Schedules. Personalities. You feel like crying because you worry that you're failing at all of this, that you're letting your people down.

You look around at the work your team is doing, at the work the entire cast is accomplishing, and you are both moved and proud. You see people taking care of one another: checking in on someone who is sitting alone, reminding folks to avail themselves of shade, pressing a mug of water into a friend's hands and not moving until they drink the whole damned thing. You recognize that this is a challenge, but it is preparing you for a rigorous, excellent, kickass performance run.

And then you chug another glass of water, read for a while, and crash. After all, you've got to do this all over again tomorrow.

Overwhelmed by life/work/rehearsals/trying to be responsible and creative and supportive.

More on this later. Just checking in to let you know I'm all right and still dedicated to making this LJ thing happen.

While my actual kitties are somewhat accustomed to our summer weekend absences, the wildlife is not so attuned. When I got home after today's 10 hour rehearsal, one of the younger tree kitties* came racing up to the back door and pressed her paws to the glass, ready for treats. I cracked the door, holding out a piece of granola bar.

Peed. Looked at me, clearly pained by her social faux pas. Peed some more. Retired to the paving stones, sat down, uncertain as to how to proceed.

I set the granola bar on the back step and closed the door. She bounded over, scooped up the treat, and - very carefully avoiding the trail of pee - made for the woods.


Mildly amusing anecdote aside, it occurs to me: flailing. Social anxiety. Inappropriate pee. Desire for treats overcoming all of these things. Yup; pretty sure I am a tree kitty. 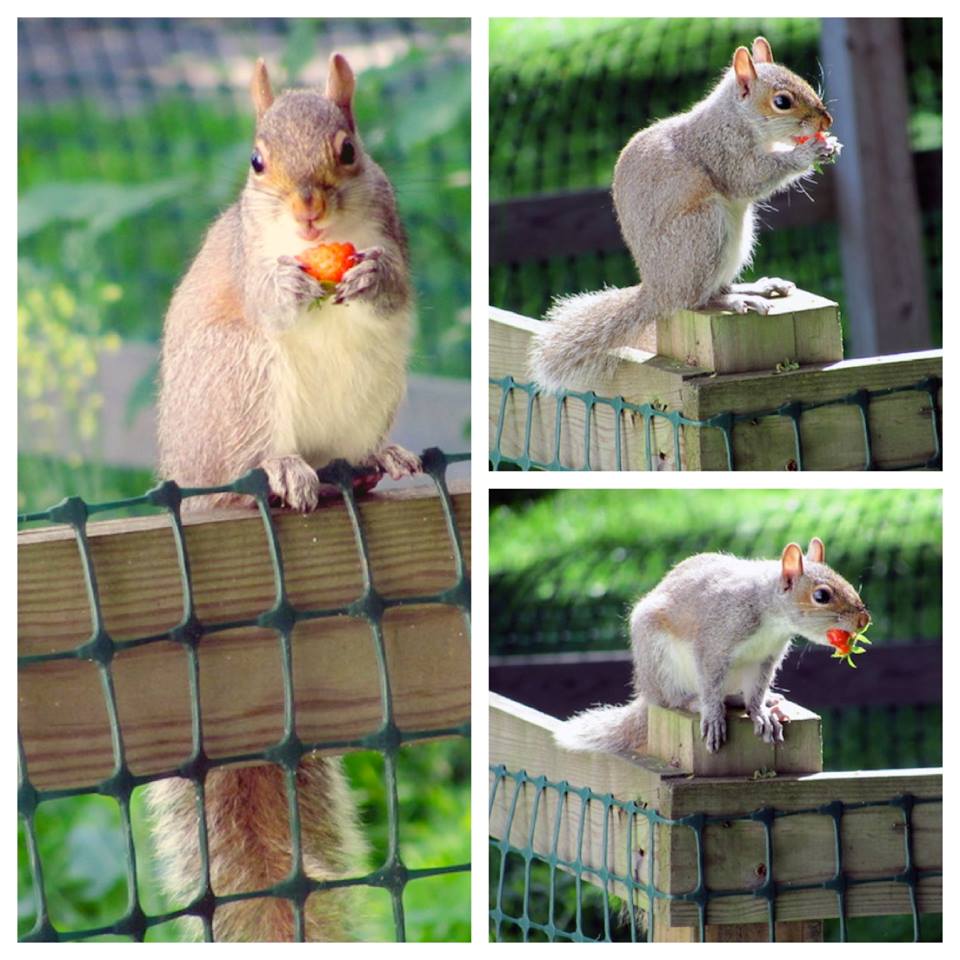 Way back when, I performed at the New York Renaissance Faire.

Then, sort of, I didn't. I showed up on occasion and sang with my pirate band (as you do), but I was temp help only.

In 2012, I once again joined the cast. In the course of all of this, I've played so very many roles, worn a plethora* of hats. I've done a lot, seen a lot, been through a good many rehearsals. This one, though? It looms. Not certain we're in any worse shape than in years past, but it feels frantic. We've not yet had full cast on any given weekend. There are scenes that have not yet been put on their feet. Fight choreography, while well underway, is not yet finished. Whatever is not ready come opening weekend is 100% on me.

And yet... I work with astonishingly talented people. My choreographers and fight captains are simultaneously inventive and grounded. My cast? Focused, talented, funny as hell, and (thank heavens in an ensemble group) team players. They care about the show, they care about each other. We'll get things done because they need doing.

Deep breaths. All may yet be very well. And when in doubt, cue for the head swipe.

*yes, El Guapo. I know what that means

It's been just over two years since I've posted on this account. I was inspired by

harpiegirl4 to consider this platform as my primary social media contact.

There was a time when I posted here regularly. Not saying I was particularly articulate or clever, but damn... I said things. And I engaged in conversation with those who - bless! - followed my posts. In the days/months/years since I've abandoned LJ, I've established a presence* on Facebook, on Twitter, even on Tumblr (which I still don't remotely understand). I have a blog that, despite all my intentions, basically serves as a way to make the month of April matter.

So. I'm going to revisit LiveJournal. I'm going to rediscover what made my first foray into social media, into sharing my ordinary and everyday and trying to make it compelling (ha!). I'm going to step away from the single sentence, shared meme, quiz of the day. I'm going to tell you a little bit about me that will - let's be clear - probably be astonishingly dull. It will, however, be of my own making.

*tens of people know who I am. TENS!

On the one hand: I am tired. I have cramps. I am weary of being the grown-up, the therapist, the voice of reason.

On the other: I am fortunate. I am strong. I am lucky, I am loved, I am thankful.

Whenever it feels too hard, or I run cranky, I need to remember the last bit. Damned if it isn't exhausting, though.

I'm a reader. I adore books. I love to reread them, to share them, to gift them, to treasure them.

I suppose that's how I ended up with several groaning bookshelves throughout my house, as well a ridiculous amount of books stashed in the attic. Once upon a time, I never gave a book I'd read away. It was as if the act of reading translated to a soul-deep bond: I carried part of the story in me, the book forever held the imprint of my hands. Then again, that was also the time that I finished every book I started, no matter how laborious or inane. Once I started working at a book store, the sheer number of books begging to be read - from publisher-supplied ARCs to the stacks and stacks I purchased  - necessitated some discernment. If a book didn't hold my interest, or made me cranky, I put it aside. There was an endless supply.

Along those lines, I accepted that I was holding on to books I'd never reread. Heck, I hold on to books I am sure that, some day, I will absolutely get around to (this is in addition to the entire, double stacked TBR bookcase, my ebook backlog, the books that have been loaned/gifted to me, and what I borrow from the library). I've done several purges over the years. I'd sell them to the used book store, send them to friends, heap them upon my nieces and nephews, donate them (in the small quantities allowed) to the library. Each time, it gets a tiny bit more manageable... and then it all starts creeping back.

Of those books in the attic, many have been there since we moved in ten years ago. Some have cycled through the Great Bookshelf Rearrangings that happen every couple of years. There are books in bags, in Rubbermaid containers, in bookstore boxes (I haven't worked there in nine years). They're languishing in the dark and the dust, unread, when there may be readers just waiting to connect with them. So... as part of the Declutter The Attic! initiative spurred by my sweetie, we hauled all of those books to the living room and sorted through every last one. I'm not decimating my stockpile. I'm keeping the ones I love, or just really like. I'm keeping the ones that were important to my childhood* (those Black Stallion books are going nowhere!). I'll do another pass in a month or so to see if my first decision sticks, and to organize the duplicate copies.

Duplicate copies, y'all. Of so. Many. Titles. There are certain books I clearly wanted in both soft and hardcover (one to read and one to look pretty on the shelves), those I buy intending to -someday- give them as gifts, and those I buy whenever I see them because they're hard to find/out of print. I have three copies of Jane Yolen's (admittedly excellent) picture book Merlin and the Dragons. WHY? Three copies of Terry Pratchett's The Fifth Elephant: one trade paperback ARC, two first edition hardcovers, one of which is signed. Three copies of American Gods: regular trade paperback, hardcover signed first edition, and the British trade. Two copies of the entire Westmark trilogy.

It's time.** Time to let go, to be honest with myself, to get rid of books that are just stuff instead of treasured - or potential - friends.

If I regret any of these decisions further down the line, it's a short trip to the library.

*going through books at my mom's house, I found an entire box of my Nancy Drew and Trixie Belden books. I should just let that go through the estate sale, but... sigh

**there's the teensiest possibility there are other reasons I need to get rid of clutter, to unblock, to encourage positive energy flow. but then you all know that. <3

I have far, far too many things to read. Even so, when I come across a recommendation that piques my interest, I'll pop it to the top of the list. So it is I can thank Forever Young Adult for putting this zippy, delightful graphic novel on my radar.

Thing is, it stirred feelings. Cosplay sorts of feelings. Granted, aside from the story, it's because of the swords. And the wonderful attitude. And the boots. The boots are excellent. I know I should really be about twenty years younger, and twenty pounds lighter, and possessed of even the most basic sewing skills to cobble this costume together...

Still. If I could get this going, I might just have the confidence to visit - and enjoy - a con, in costume.* 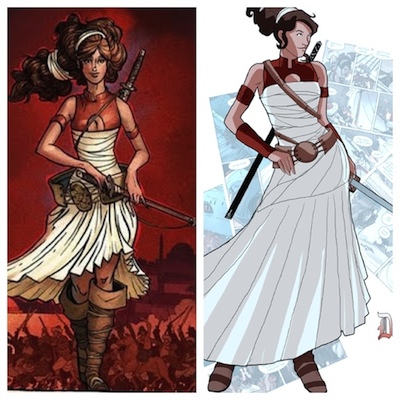 She's sort of excellent, y'all. 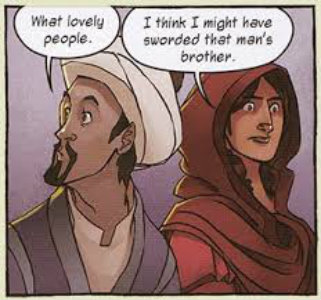 *I've friends who do amazing, seemingly effortless cosplay, and have a great deal of fun in the process. I am in AWE.